Home > Networking>Mikrotik CCR2004-16G-2S+ Cloud Core Router
Are you an Operator of the Sector
If you are a company or a professional consultant of Netoworking and Telecommunications sector, request the access to the reserved Wholesale price lists.
Request Mode: 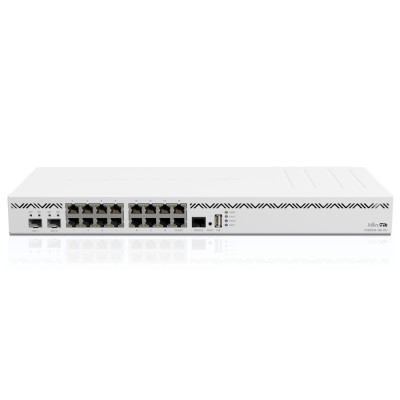 Like the other models in CCR2004 series, this CCR also features the Annapurna Labs Alpine v2 CPU with 4x 64-bit ARMv8-A Cortex-A57 cores running at 1,7GHz. But here’s the difference. This powerful router crushes all previous CCR models in single-core performance, and that is the most important aspect when it comes to heavy operations based on per-connection processing. Like queues, for example.But that’s not all! It also has the best single-core performance per watt and best overall performance per watt among all the CCR devices. Better for the planet, better for the bills, it’s a win-win!

The new router has 18 wired ports, including 16x Gigabit Ethernet ports and two 10G SFP+ cages. It also has a full-size USB and RJ-45 console port on the front panel. Like all CCR devices, it comes in a classic white 1U rackmount case. Built-in dual redundant power supplies are included, so you have one less thing to worry about. And, of course, there is active cooling to keep things nice and cool. Each group of 8 Gigabit Ethernet ports is connected to a separate Marvell Amethyst family switch-chip. Each switch chip has a 10 Gbps full-duplex line connected to the CPU. The same goes for each SFP+ cage - a separate 10 Gbps full-duplex line. Boards come with 4GB of DDR4 RAM and 128MB of NAND storage.

So as you can see - no bottlenecks. As long as the CPU can handle the processing, all ports can reach wire speed. And this CPU is a beast that can handle a lot. If we look at the performance, you can see that it is trading blows with our CCR1009. Even surpassing it in CPU-heavy configurations! And if that wasn’t enough – it can even reach the performance of CCR1016.

The best part? This brand new CCR is among the most affordable options out there - not only within the CCR series, but on the market in general.One of the most common ways to use this device would be: Gigabit Ethernet ports for the internal network; SFP+ ports for downlink and uplink. The perfect all-in-one solution for small and medium-sized businesses. Easy and efficient.

With the new Mikrotik CCR2004, you can take your office network to the next level. Without breaking the bank.

30 other products in the same category: